This Burrow Couch Review was recently done by the MattressJunkie.com team.  Unlike couch deliveries you’ve had in the past, the Burrow couch is shipped direct to the consumer in several large boxes. Similar to the mattress in a box buying process, consumers have a risk free trial period to receive a 100% refund if they decide the couch doesn’t work for them.  Burrow is a direct to consumer couch in a box company disrupting the couch buying process.  Whether you need a pink velvet sectional or a navy blue sofa for the man cave, Burrow has expanded their sofa line to include fabric couches, velvet sectionals, black leather sofas with matching black leather accent chairs. The full Burrow furniture line is quite impressive and has something for every style. Go ahead and check out the full site and order that camel leather sectional you’ve always wanted. All Burrow sofa orders come with a 30 day trial so if you aren’t happy for any reason, Burrow will happily give you a full refund. 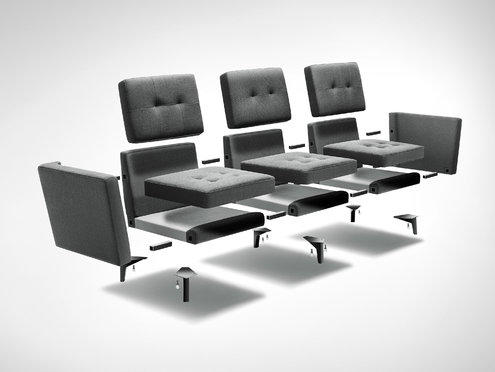 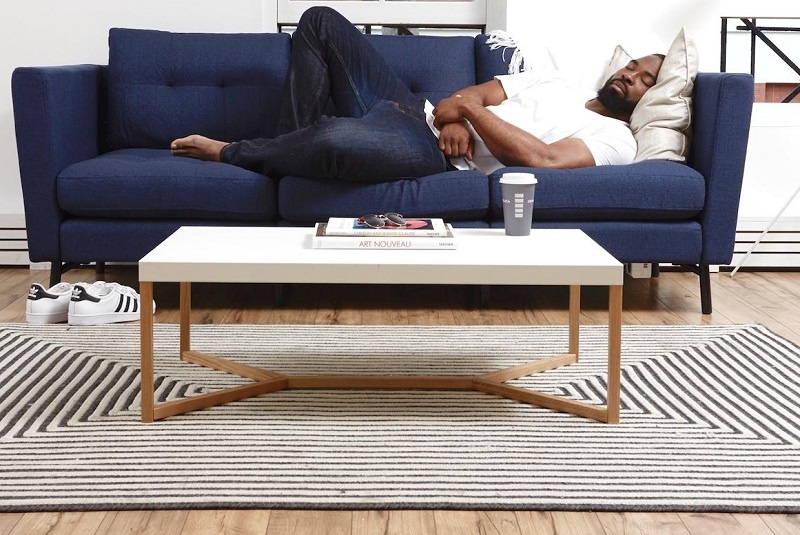 What makes the Burrow Couch So Cool?

The Burrow Couch is cool for a ton of reasons. Easy online ordering, simple assembly that requires no tools, convenient USB ports for charging electronics, stain resistant rugged cover all while breaking down into single pieces that make moving into city apartments a total game changer. The Burrow Couch is also fully customizable to expand into a sectional or break down into a single chair or love seat adapting to your ever changing lifestyle. This flexibility has allowed the Burrow Couch to be a staple in my home for the past 2 years.

How will my Burrow couch arrive?

How Hard Is the Burrow Couch To Assemble?

Burrow Couch assembly doesn’t require any tools and takes 10-15 minutes to set up. The customizable Burrow couch legs screw into the base while the seats clamp together. From someone who’s had their share of Ikea assembly meltdowns, Burrow was even more simple to assemble than I had expected. Our Burrow Couch review rates the Burrow couch an above average rating for ease of assembly.
Burrow Assembly Instructions (scroll down to very bottom of the website)

What Happens If I Don’t Like My Burrow Couch After It Arrives?

Burrow couch come with the choice of low or high arms and in 5 color options. I received the low arm option and it’s the perfect height for me. For our Burrow Couch review I choose the low arms and would choose them again. You can also choose between 5 colors. The colors are Beige, Brick Red, Crushed Gravel, Navy Blue, and Charcoal. As you can see from the photos, we got ours in Brick Red.

What customization capabilities does my Burrow couch come with?

Burrow couch come with the choice of low or high arms and in 5 color options. I received the low arm option and it’s the perfect height for me. For our Burrow Couch review I choose the low arms and would choose them again. You can also choose between 5 colors. The colors are Beige, Brick Red, Crushed Gravel, Navy Blue, and Charcoal. As you can see from the photos, we got ours in Brick Red.
The Burrow Ottoman is a highly recommended addition to the Burrow Couch. This is a newer option available from Burrow and costs $295. The ottoman is super easy to assemble. Literally just align the legs with the drilled out holes and tighten the easy to turn screws. Add the Burrow Ottoman to any Burrow Couch and stretch out or use it as a separate seat when you have company over. The ottoman is a great size at 25 inches by 25 inches. The cushion is double sided just like the couch so you can flip it over to change the look.

What's In My Burrow couch?

All Burrow couch are safe and friendly to the environment. The wood used is sustainably sourced, the fabric is free of any harmful chemicals. The boxes used in shipping are even made of recycled materials. This is the first in our series of Burrow couch reviews so check back for more.

Tell me more about the Burrow Couch cover.

Burrow’s cover is luxurious and plush. The cover is the most durable of any couch that I have ever owned. Living with a 75 pound dog, no couch has lasted as long as my Burrow couch. As you can see from the close ups, the cover is thick and rugged while still being sleek and stylish. The Burrow couch cover is stain resistant out of the box so you don’t need to worry about treating it or ruining it if you spill something.
Order Free Swatches (top right hand corner)

What’s The Weight Limit On My Burrow Couch ?

Each seat module has a 200 pound weight capacity so a 3 seater Burrow couch would have a max weight of 600 pounds. This may not sound like a lot but I have had guests of all sizes pile on the couch over the course of my Burrow Couch review and it has held up great.

Is The Burrow Couch Available On Display If I Want To See It Before I Order?

Yes! Burrow couches are available in the Burrow showroom in our SoHo store in New York City. If you are ever in the area, there’s a Burrow couch waiting for you to kick back and relax.

How much does Burrow cost?

The Burrow couch 3 seater is $1395. Burrow offers a matching fabric chaise lounge and ottoman as upgraded add ons to customize your comfort. After reviewing the Burrow leather couch recently, we can promise you that it will exceed expectations. If fabric is not your thing, the luxe Burrow Nomad Leather Sofa is available for $2490 with an optional chaise and ottoman.  Financing is available through Affirm in 3, 6. and 12 month options.
Check Price

Burrow Couch Review After Daily Use For 2 Years

I updated my Burrow Couch Review after 2 straight years of use and abuse.  I’m still obsessed with it today just like I  was when it arrived.  Literally everyone compliments it when they walk in the house. The versatility of the Burrow Couch gives gives me furniture options for years to come.  Burrow has been the most durable couch that I have ever owned.  The quality materials are made to last. Moving in the city has never been easier.  The modern,  sexy look of the Burrow couch reminds me of something you would find in high end stores like Crate and Barrel or West Elm for 3x the price. If you are in the market for a new couch, get something that can adapt to your changing lifestyle whether you need a chair, loveseat, or sleeper sofa. 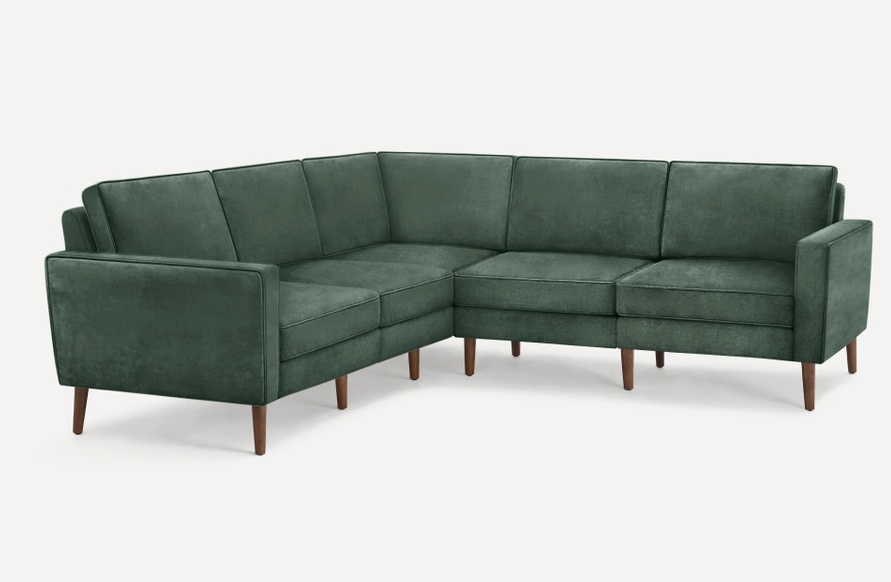 Green Velvet Sectional By Burrow
Burrow couches have come a long way since my first review several years ago. My Burrow red couch has been used for years and still looks amazing in my city apartment. Burrow has grown a ton since then and has added a ton of new products to their home furniture offering. As always, Burrow comes with a trial period so if you decide against a pink velvet sofa after getting it moved into your home, they will always swap it out or refund you during that trial period. Below are some of our favorites from the Burrow sofa collection currently sold their website.
Check Price 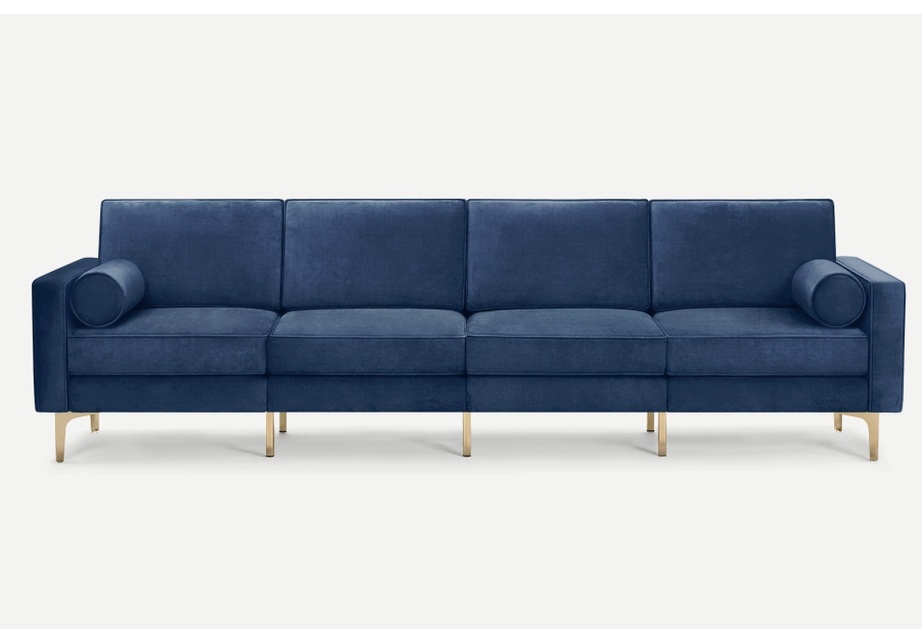 The Burrow Nomad blue velvet couch is one of our favorites velvet couches. You won’t walk into many furniture stores and find a navy blue couch this nice. Burrow’s blue couch is rich in color and feels as luxurious as it looks. This blue velvet couch is available as a couch with ottoman or as a sectional couch. The sofa legs can be changed out to fit your exact taste. Also available as oversize sectional for those of you who are looking for a blue velvet sectional for your large living room spaces. Blue velvet sectionals are available in 5 seat, 6 seat, and 7 seat options. These modern corner sectionals are as nice as an high end furniture store and at a fraction of the cost.
Check Price 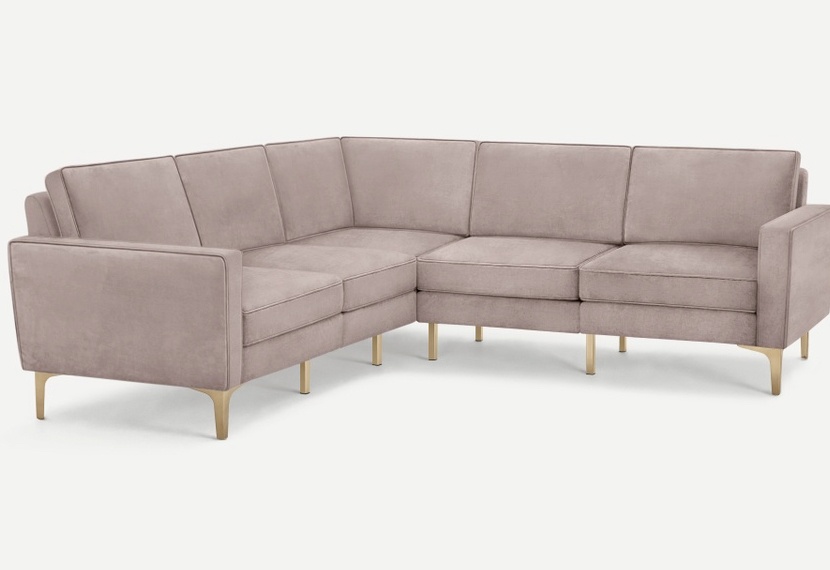 Gray sectionals are a great addition to many living room space. A gray sectional will work with a variety of paint colors. You never have to worry if a gray couch will clash with your current setup. Burrow has a gray sectional available in durable fabric that will last year after year. Burrow Nomad is a fabric sectional durable enough for pets and kids. The OG Burrow couch has been used for years and years at my place and still looks great.